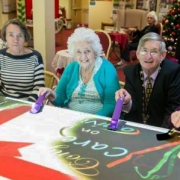 The OMI was funded by donations from Tesco Bags of Help, Twyford Art Group and Cllr Netta Glover from Bucks County Council, who gave a contribution from the Community Leaders’ Fund. Attendees witnessed the impact first-hand of the award-winning device, which encourages engagement, use of motor skills, social interaction and coordination.

The mobile projection technology inspires group participation through games as well as the enjoyment of therapeutic visual effects, which can be particularly helpful for those living with dementia. Resident Dot Potter’s well-being improved considerably when she participated in the session as she was able to concentrate for a longer period of time and show enjoyment from interaction with her fellow residents.

When resident, Anne Geering, takes part in game play she is more able to articulate how she feels and clearly enjoys the sense of community that arises from coming together with others.

Our team at Carey Lodge use the Bradford Well-being Profile tool to demonstrate the impact of regular use of the OMI, alongside other activities, on residents’ wellbeing.